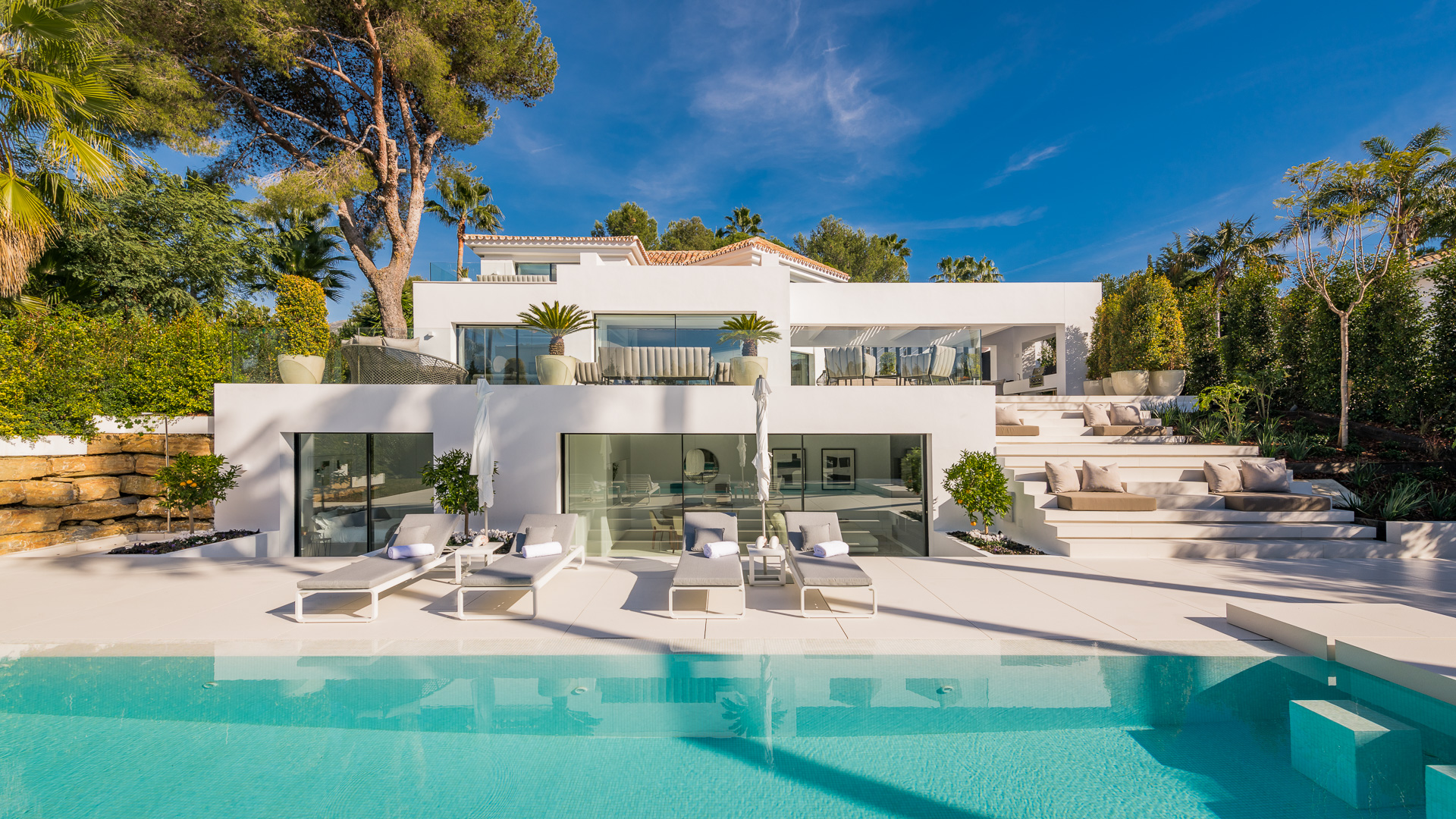 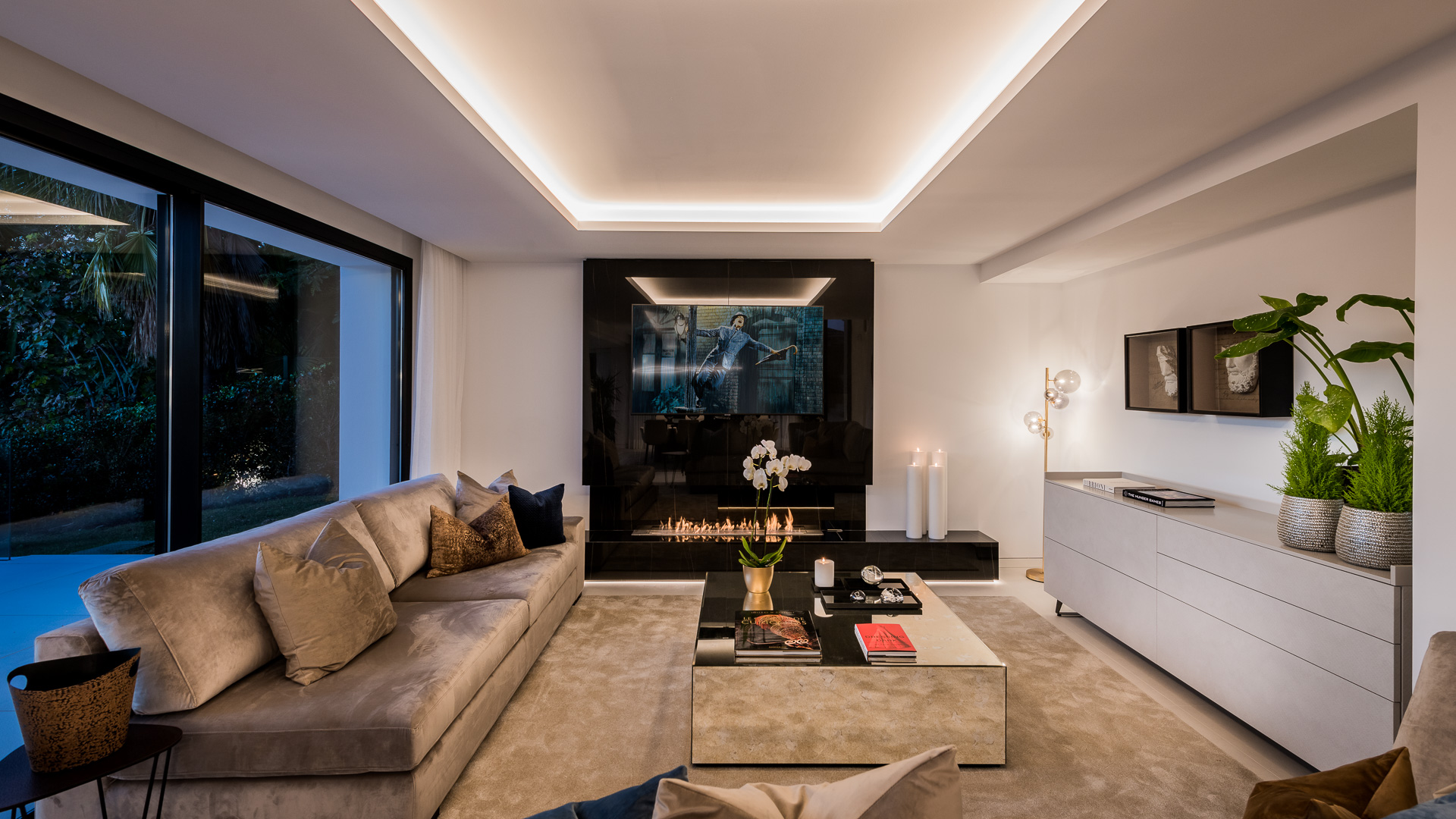 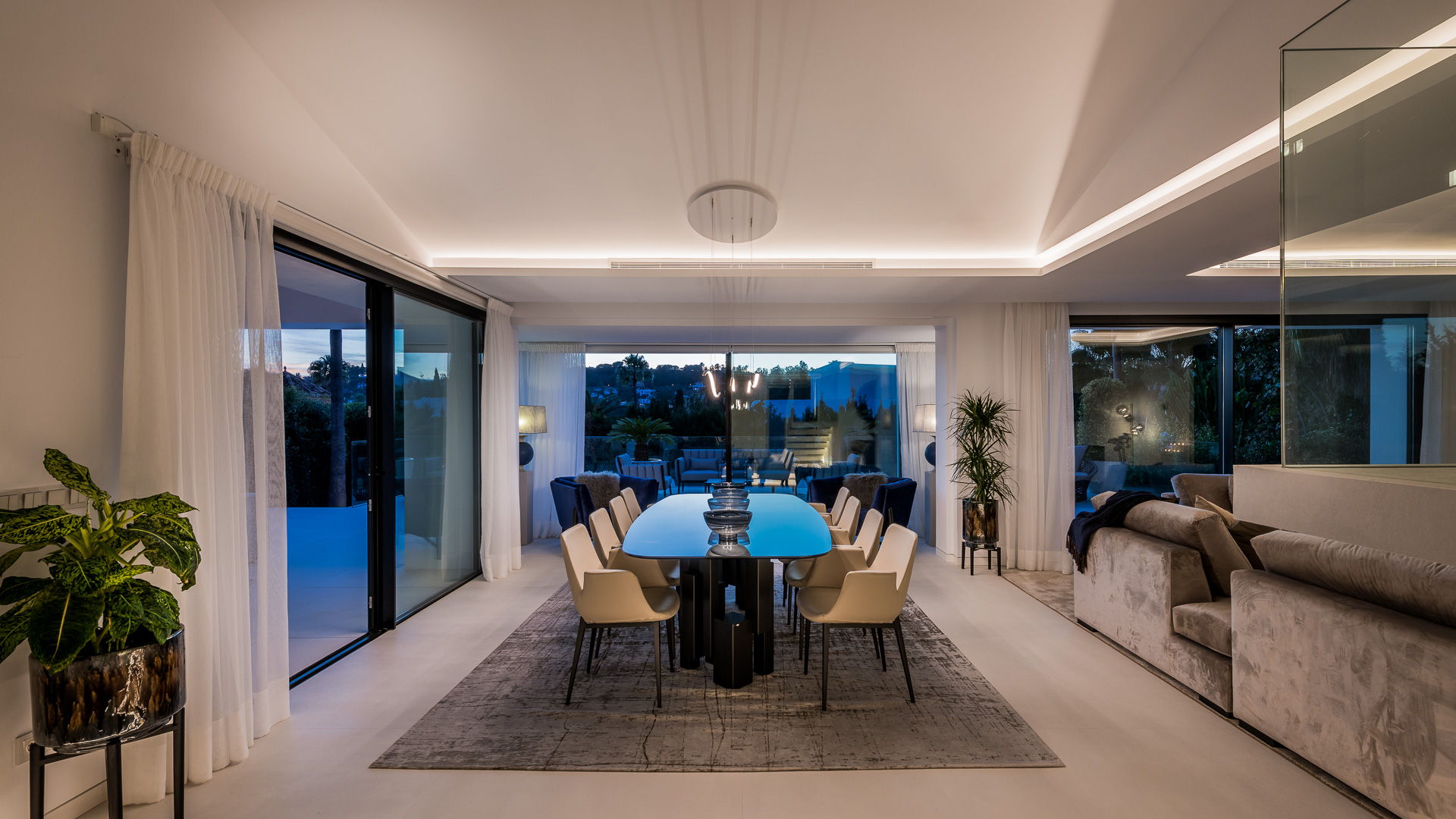 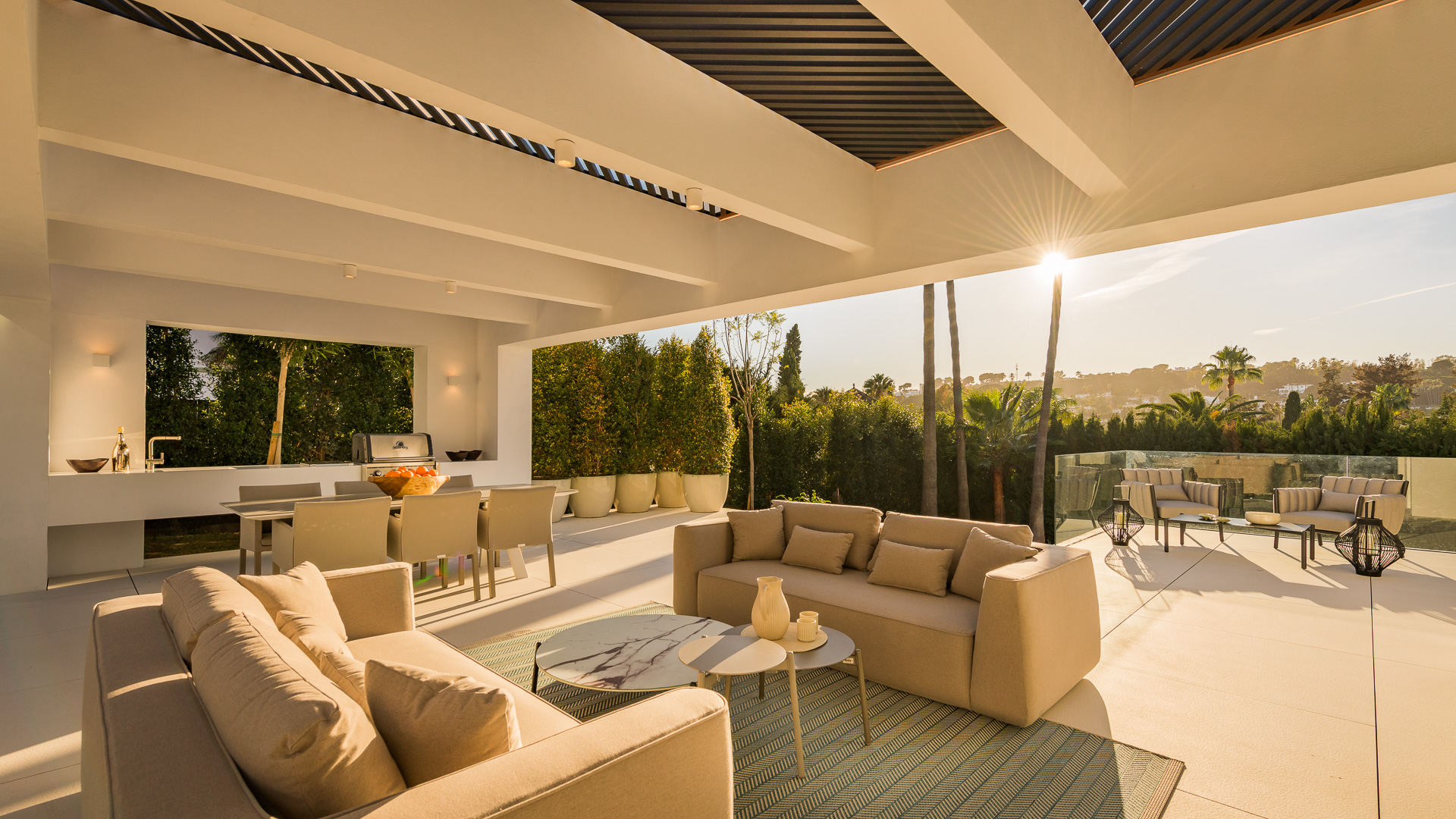 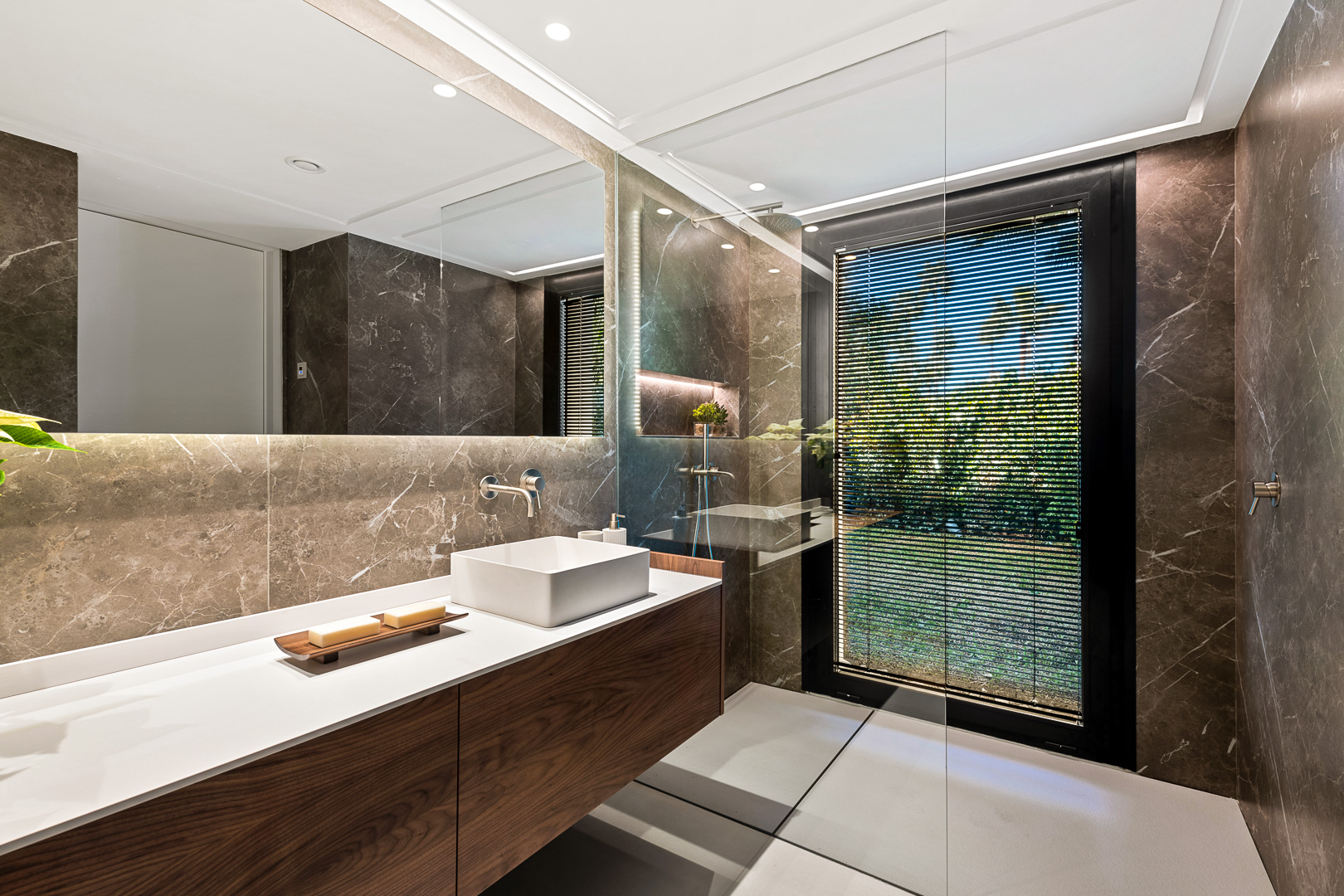 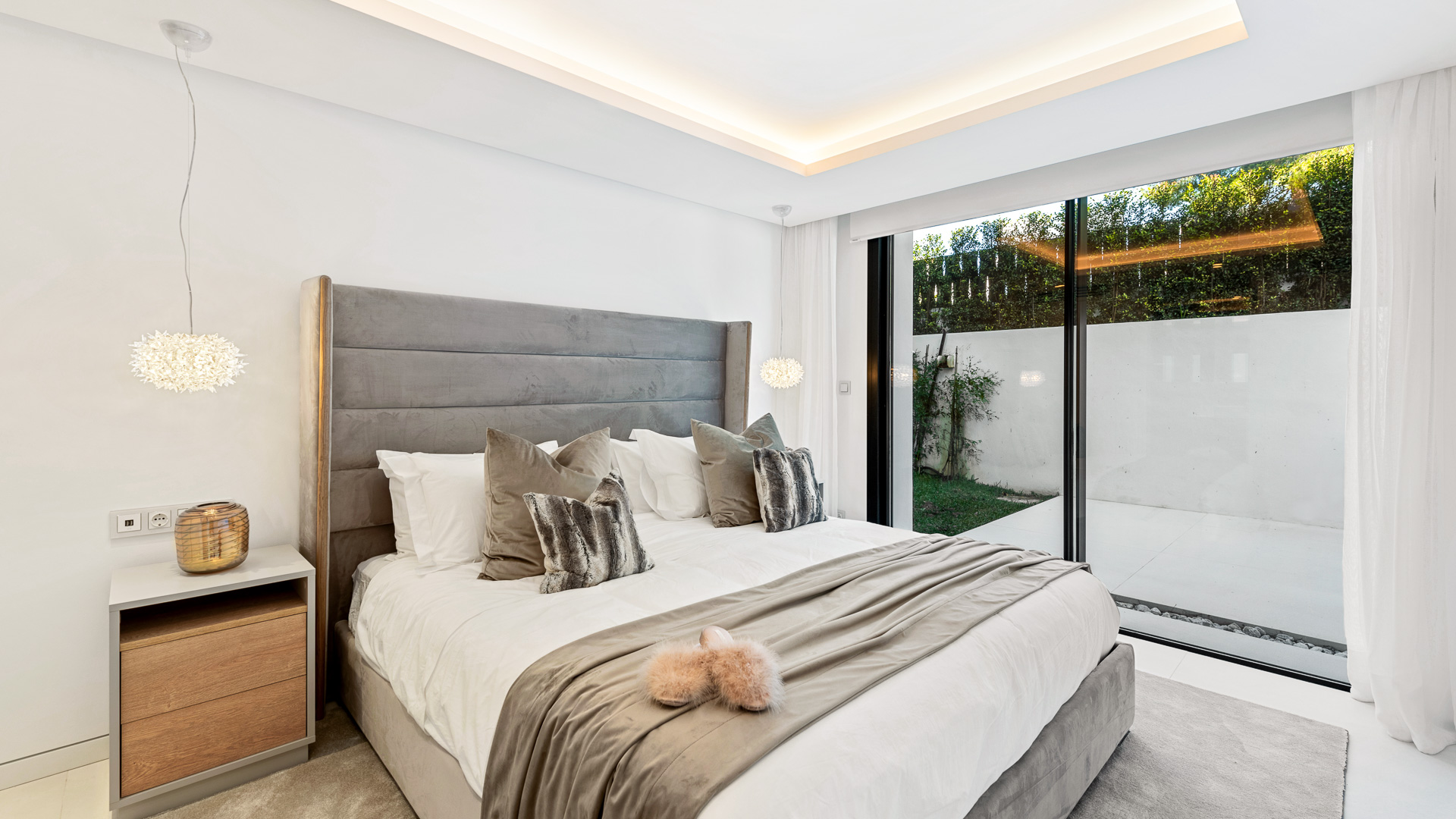 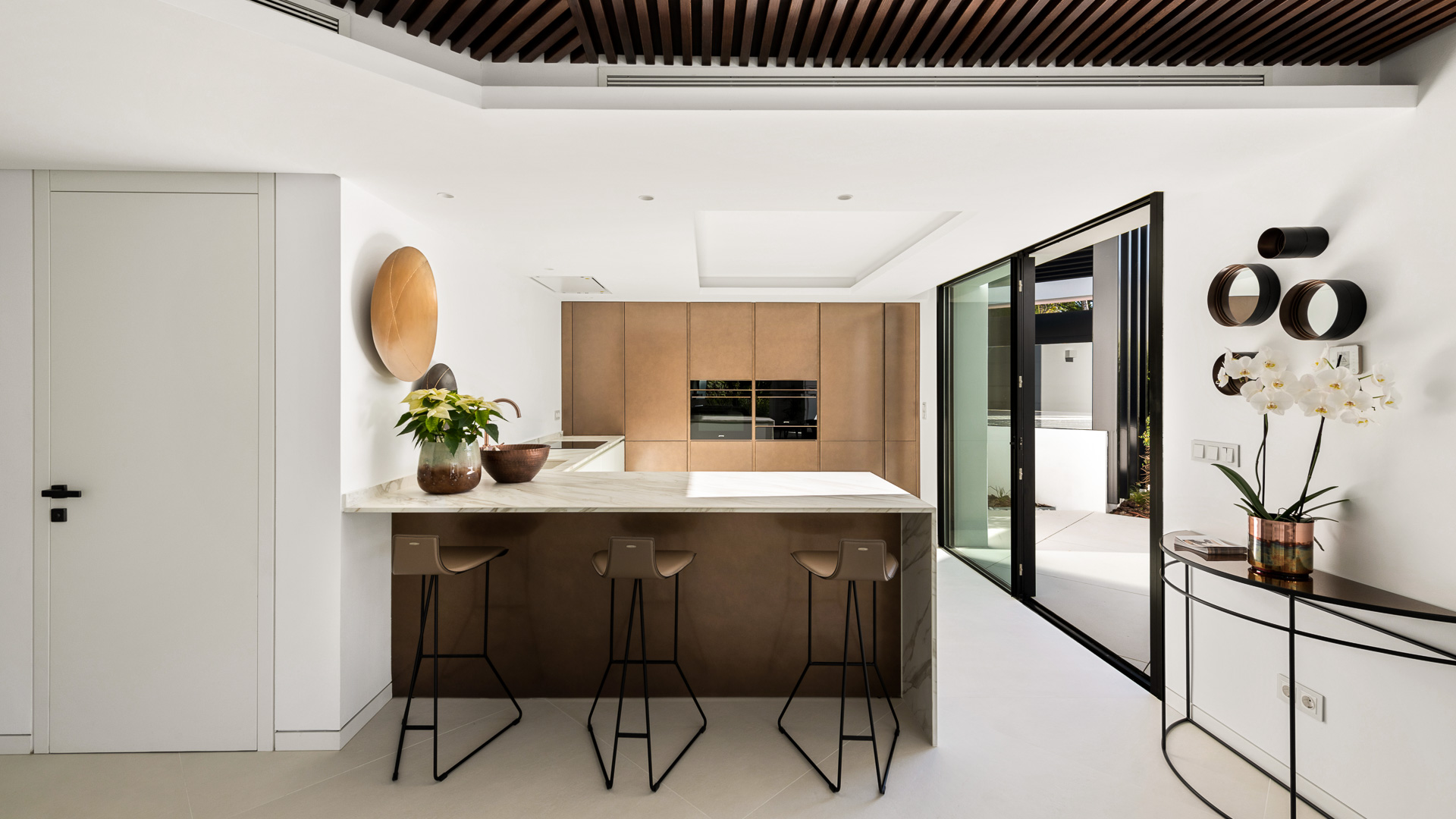 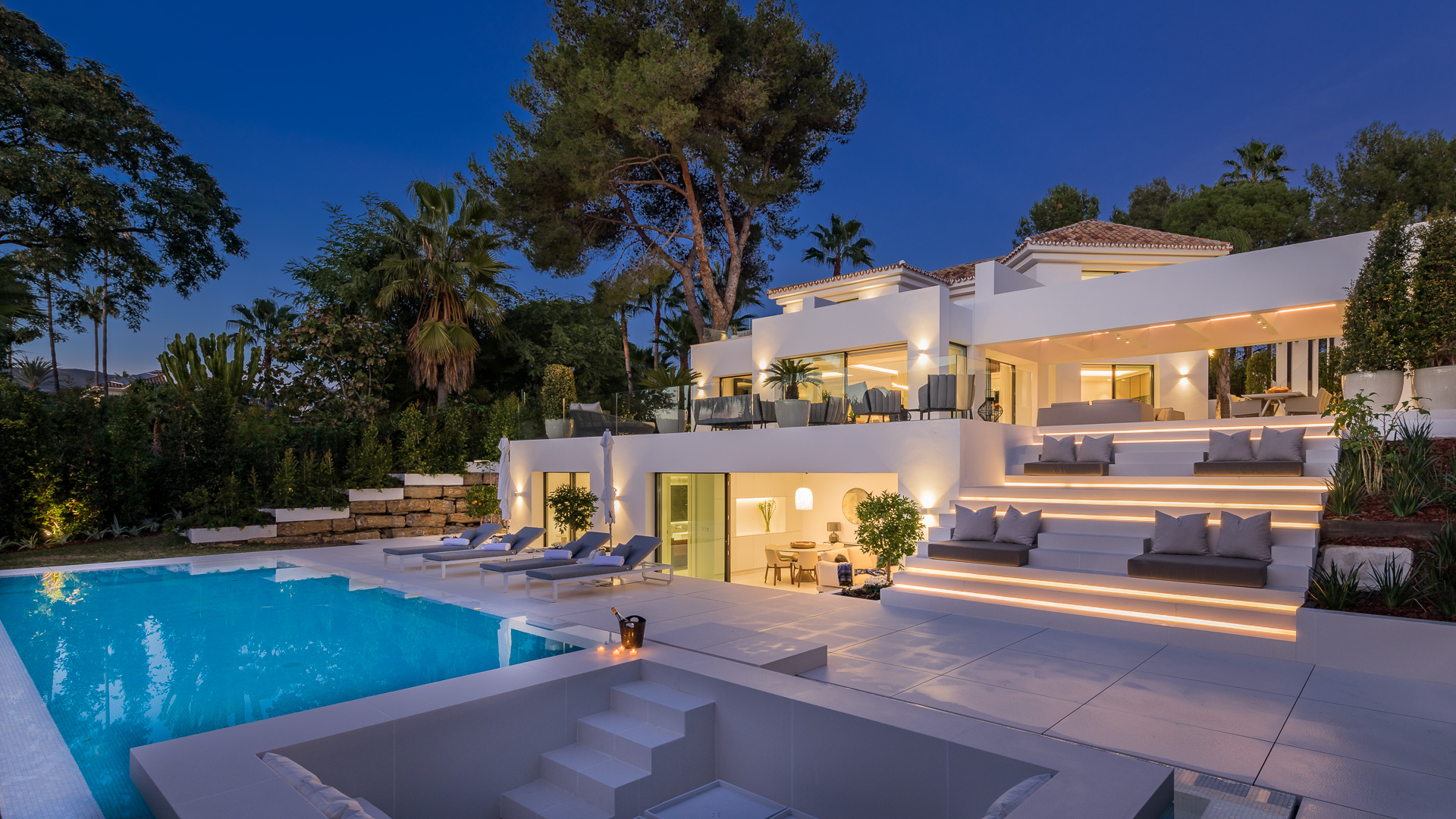 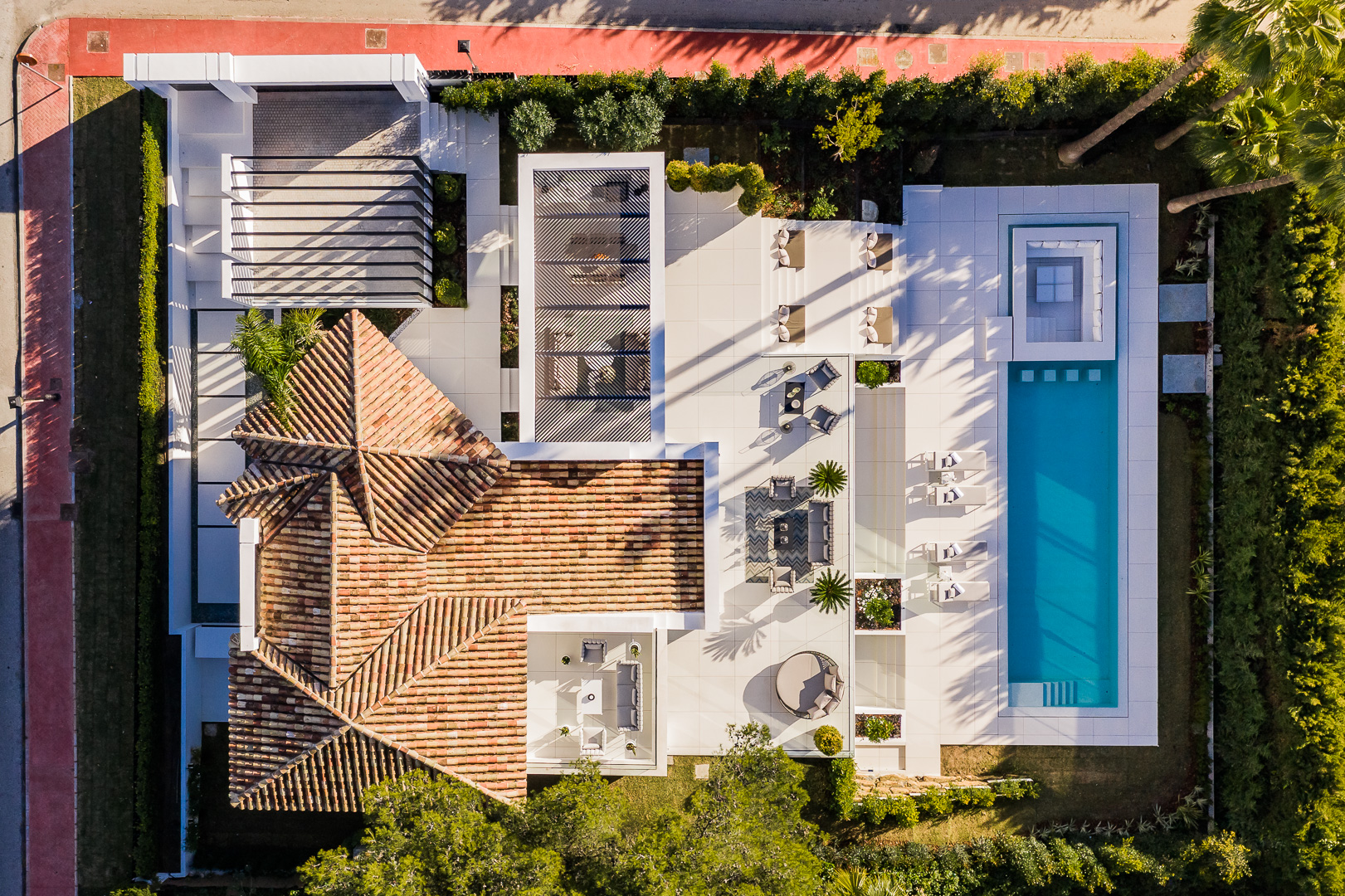 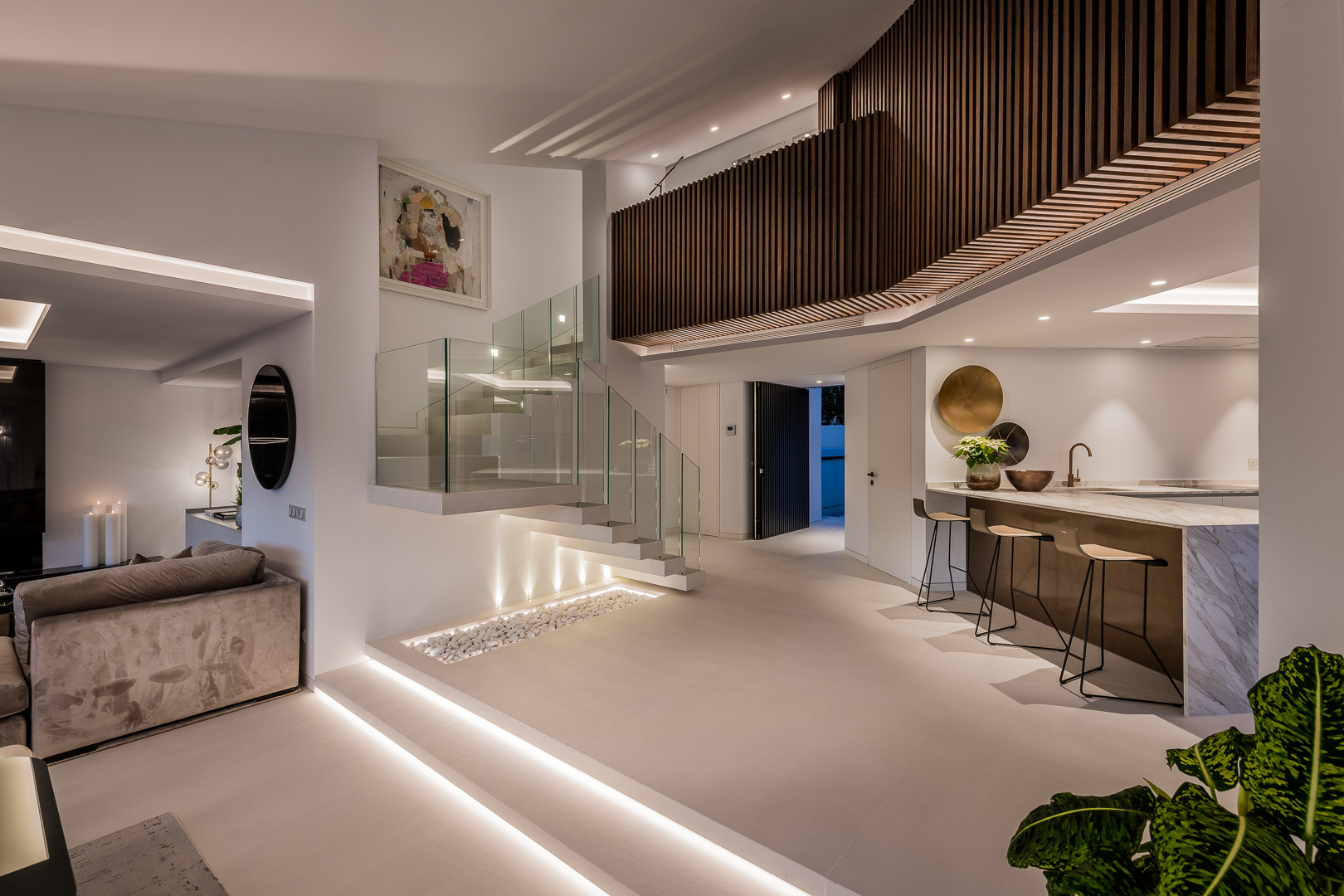 Its a modern design home, renovated beautifully with four bedrooms including a master suite with walk in closet and en suite bathroom. The property enjoys views across the fairways of Las Brisas golf course and integrates outdoor living with the ample terrace areas and outdoor kitchen expansion. By the pool there is an independent living area, guest house or playroom, with a bedroom.

Set in landscaped and private gardens, the property is located in the heart of Marbella’s sought-after Golf Valley and walking distance from many amenities including restaurants, schools, cafes, sports facilities and shopping.

Marbella is known as a glamorous resort town and is a favourite location with the rich and famous, boosted by foreign residents who are seduced by the lifestyle.

The old town with its narrow cobbled streets and flower-filled plazas is packed with delightful shops and art galleries selling pretty clothes and accessories, and handmade wares. One of the prettiest spots is the fabled orange tree-filled Plaza de los Naranjos, which is located just off the main street and is home to the 16th-century town hall For more contemporary fashions, Puerto Banus has all the top international designer stores. Which also makes you enjoy all the exclusive cars and big yachts, the beach clubs all over the Marbella coast line.

In terms of eating out, Marbella’s gastronomic scene is second to none, with everything from vegetarian and vegan cafes, to beachfront chiringuitos, and Michelin-starred restaurantsincluding Spanish cooking star Dani Garcia’s – a feast for foodies.

And of course the beaches are second to none – most visitors come to Marbella to enjoy the sun, sea and sand, which has been drawing expatriate communities since the 1950s when Prince Alfonso de Hohenlohe fell in love with the place and built a beachfront house, drawing all the starriest Hollywood celebs, which was the establising of the exclusive Marbella Club Hotel. Worth a visit, together with the luxury resort next door, Puente Romano resort. Which includes, restaurants, bars, nightclubs, chiringuitos etc. A gem in Marbella.

If your visit inspires you to consider living in Marbella, have a look at the neighbourhoods or districts that make this such a charming place to live or perhaps visit on an excursion and decide afterwards. Don’t miss Puerto Banus. 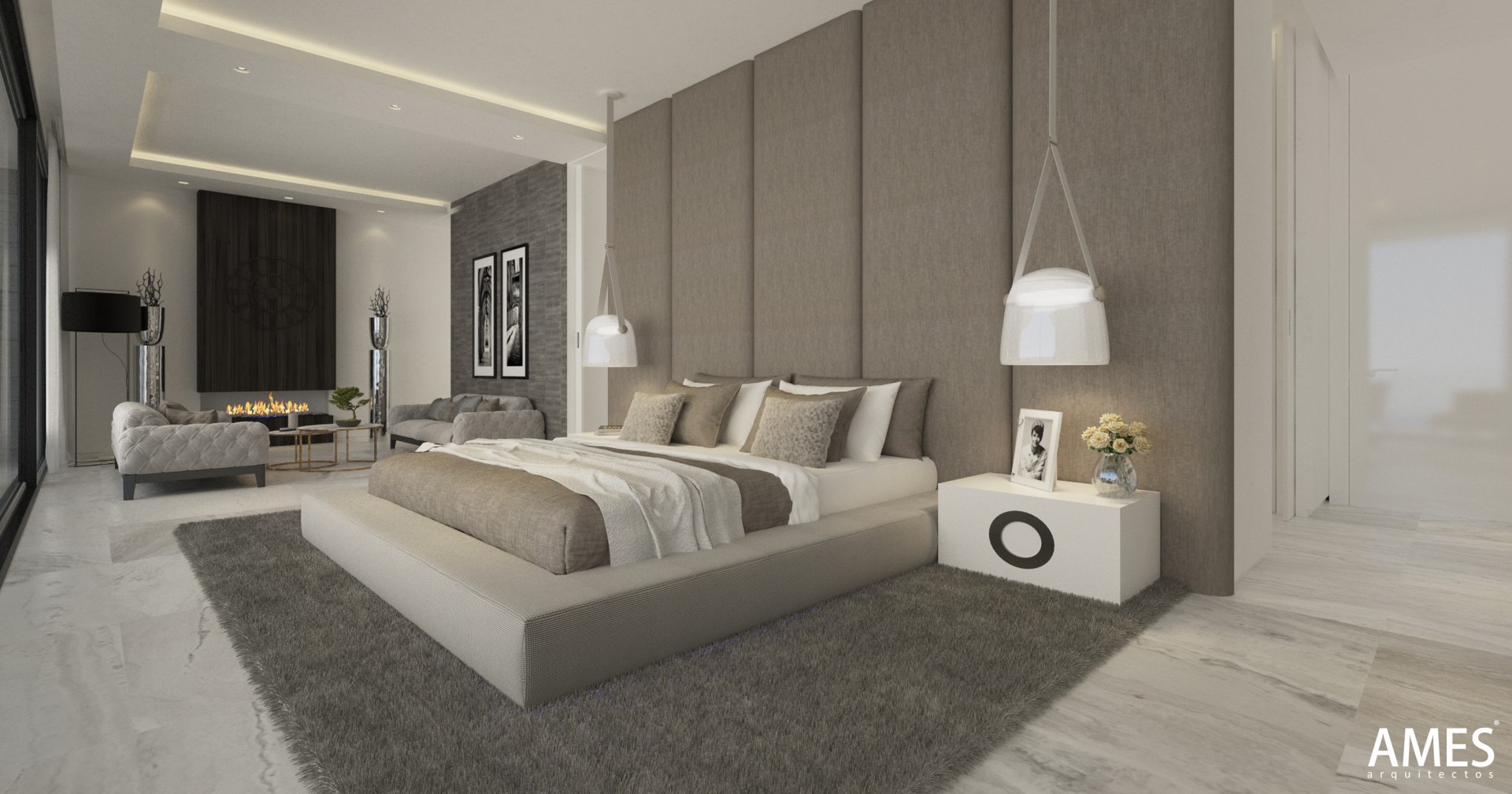 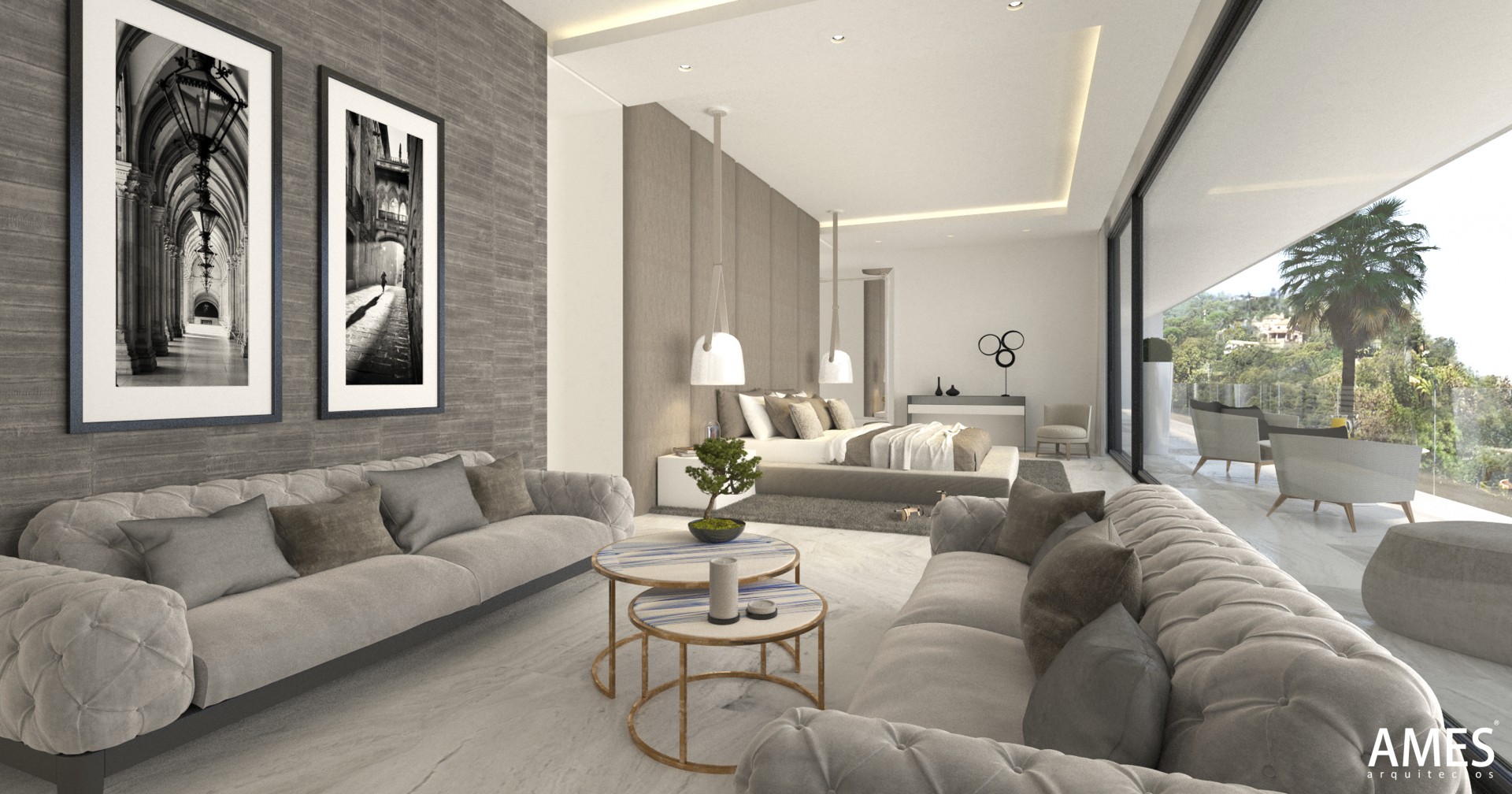 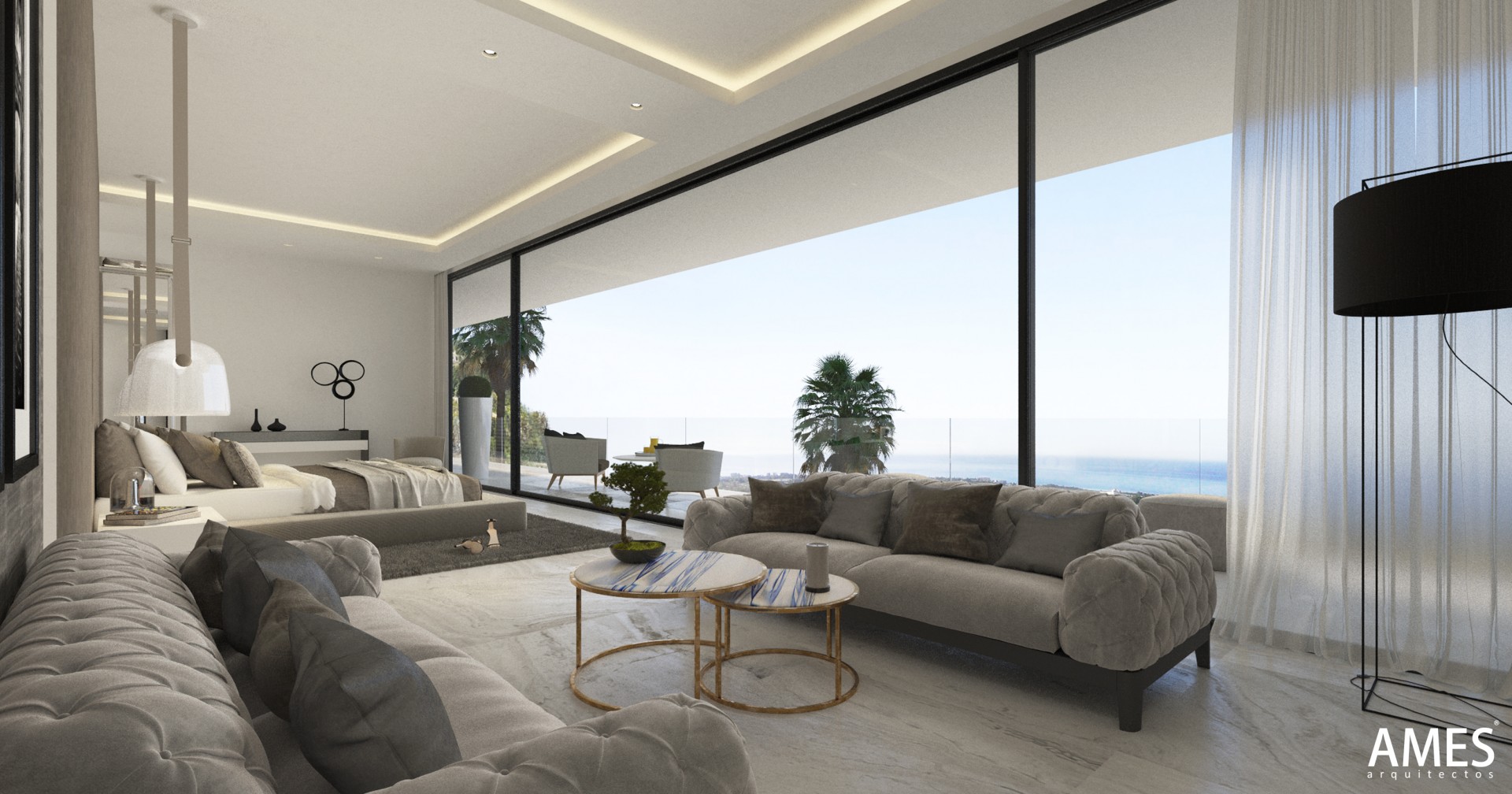 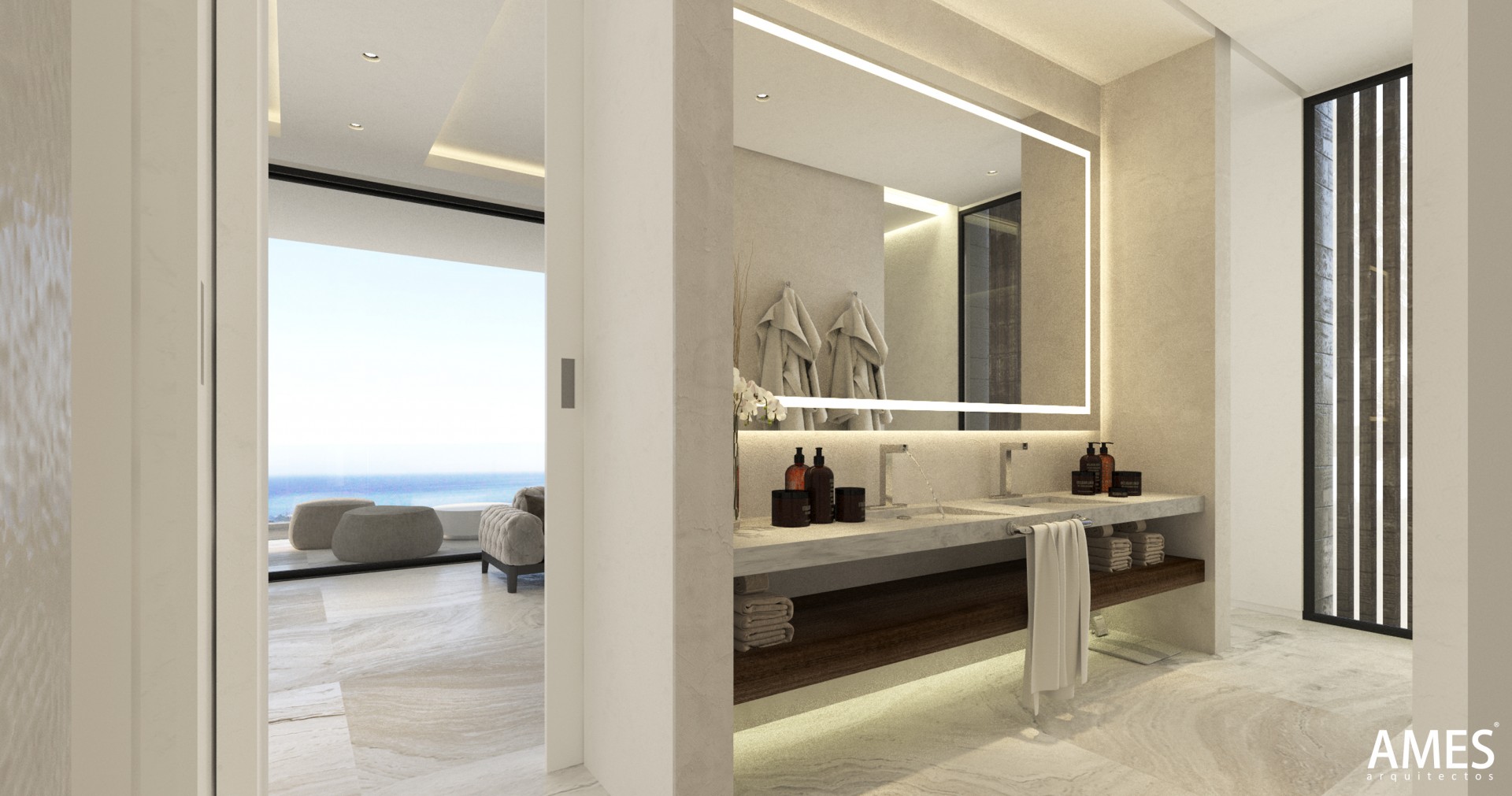 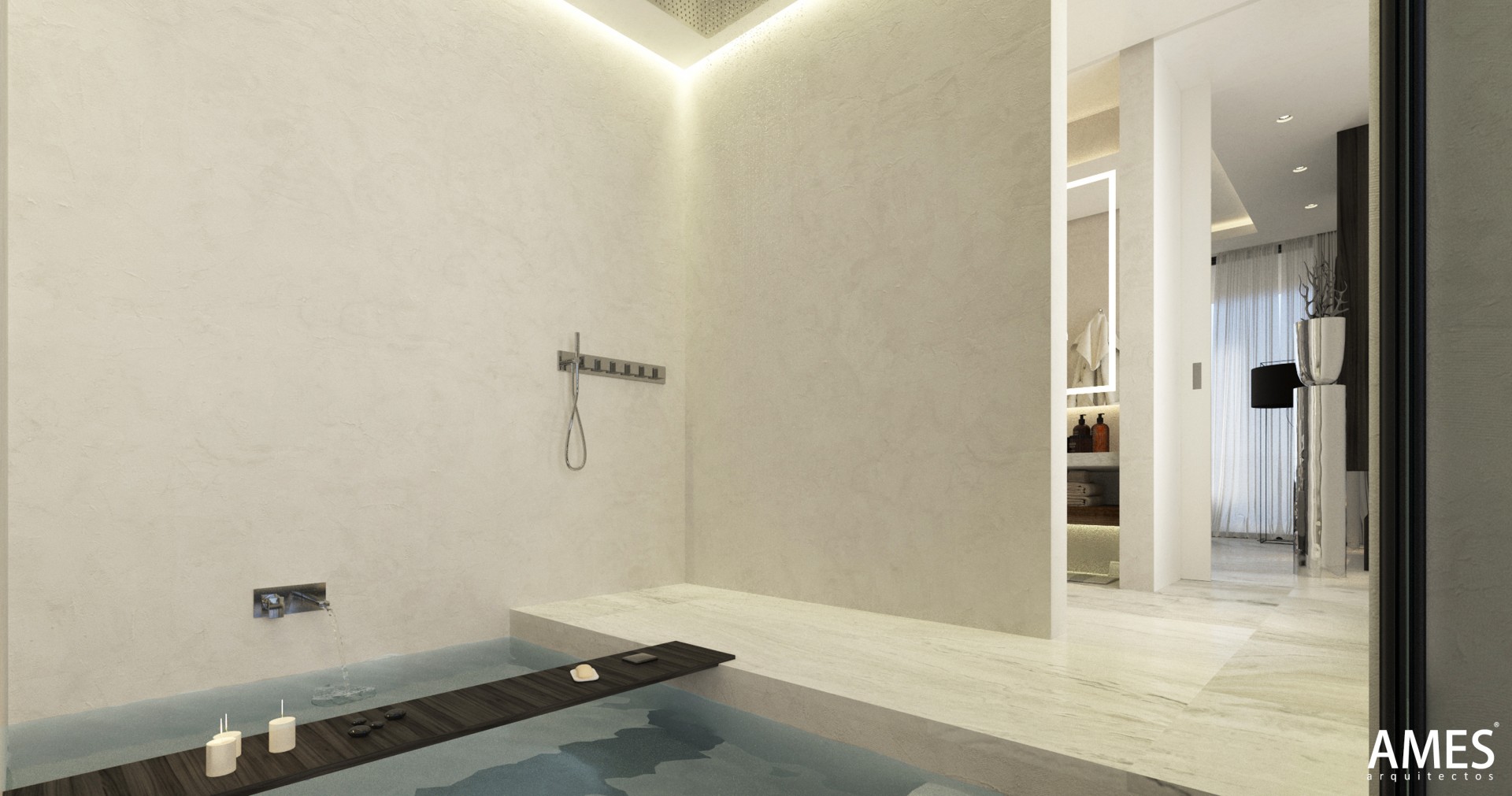 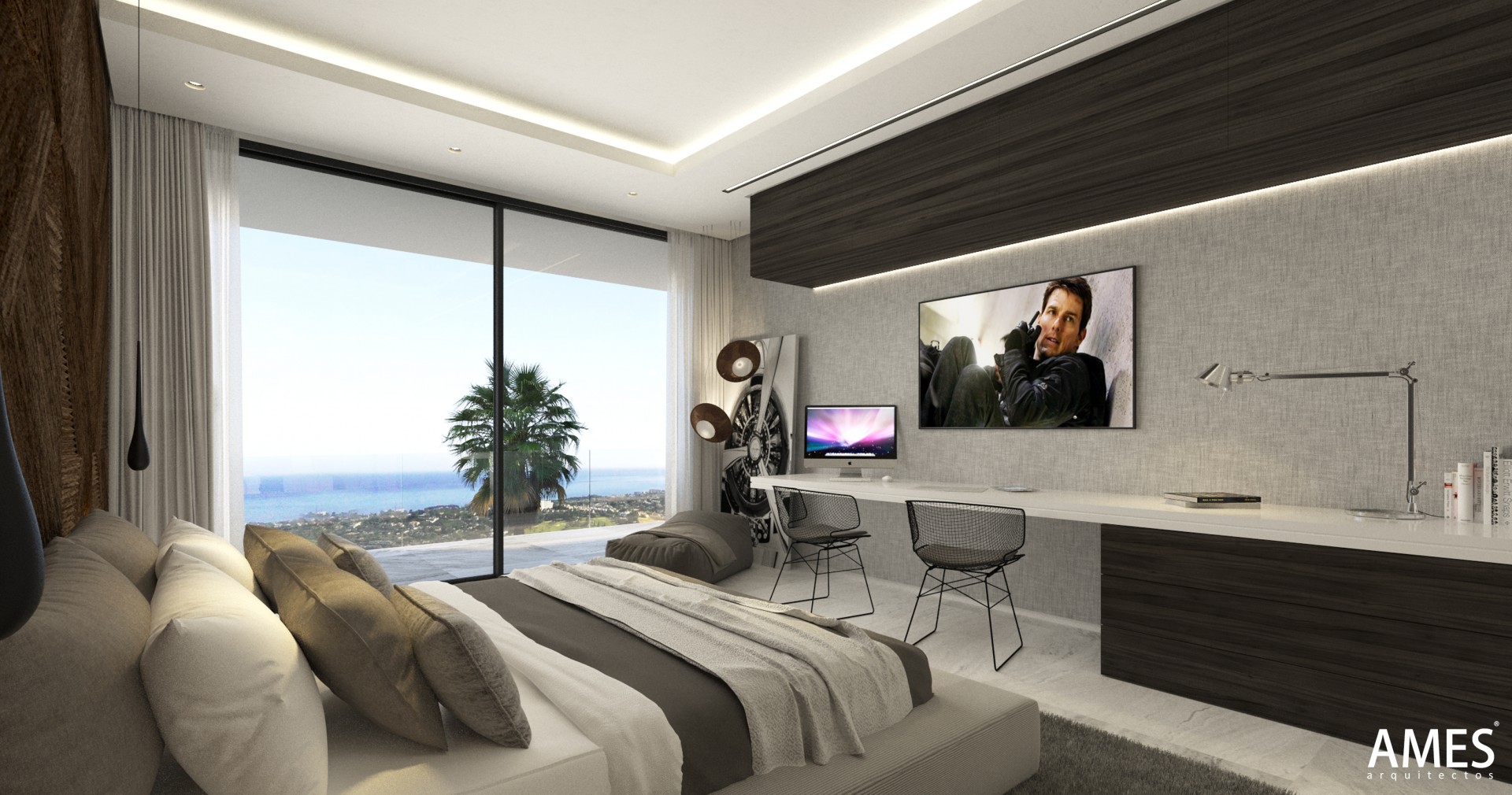 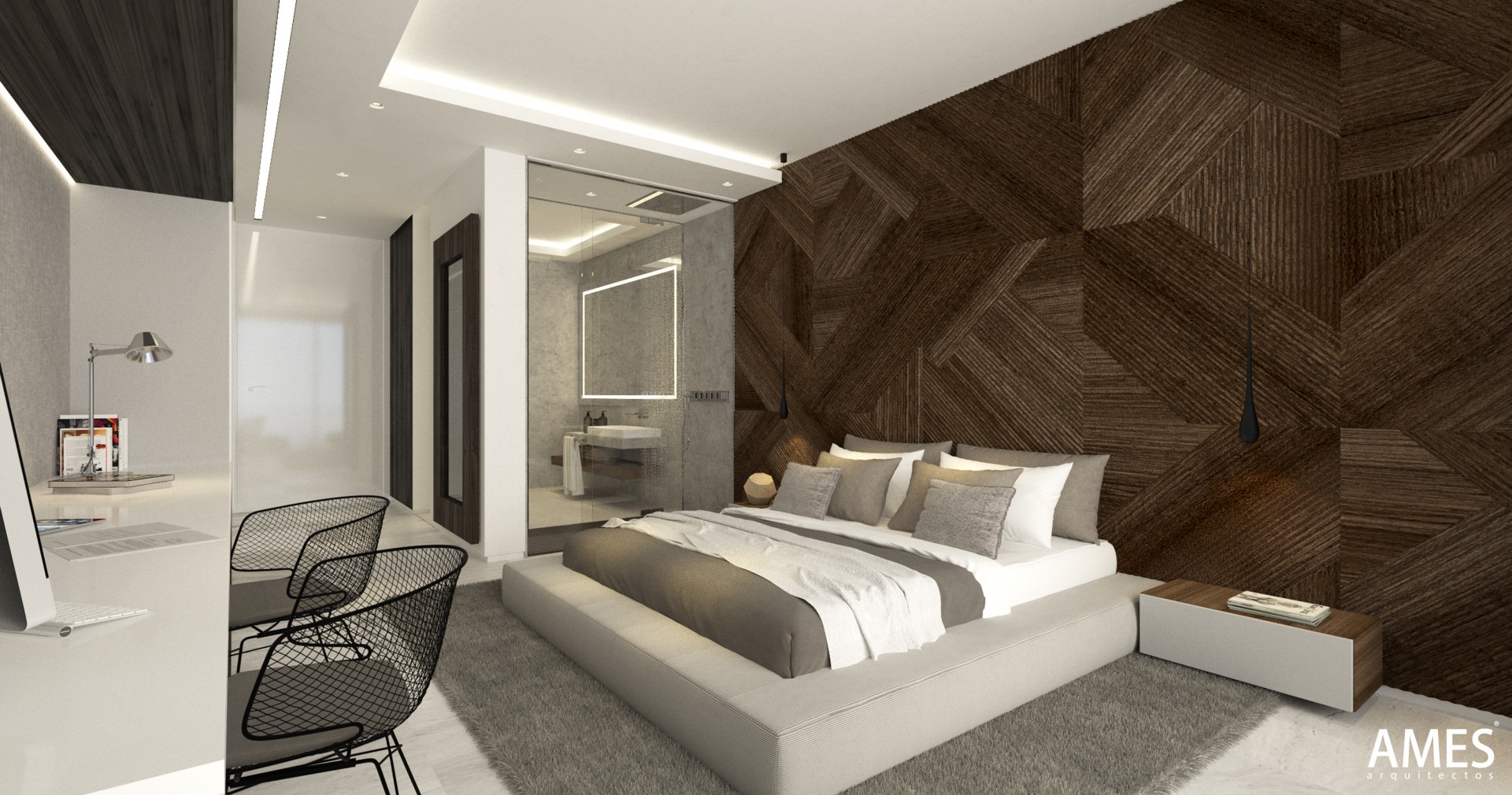 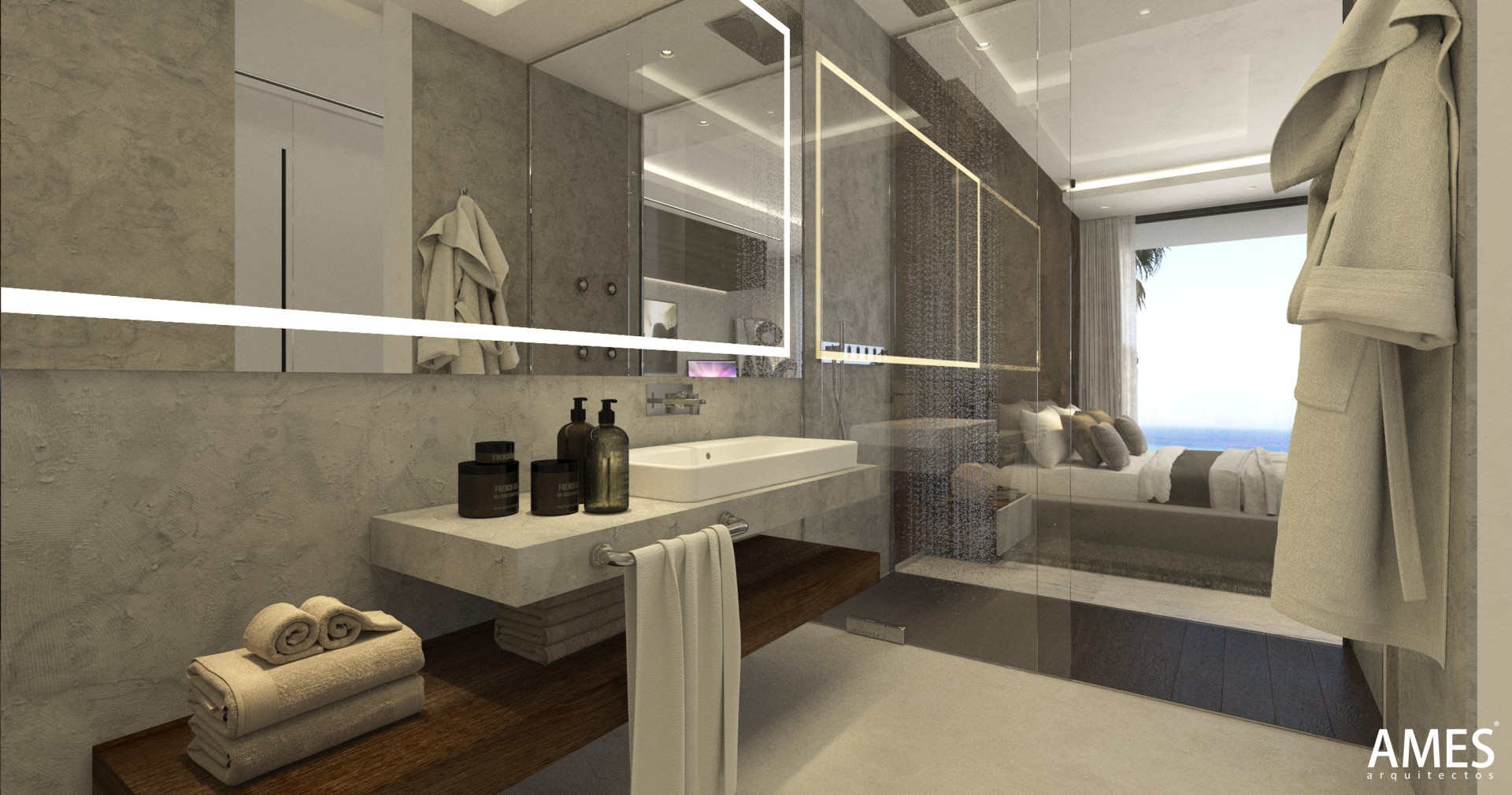 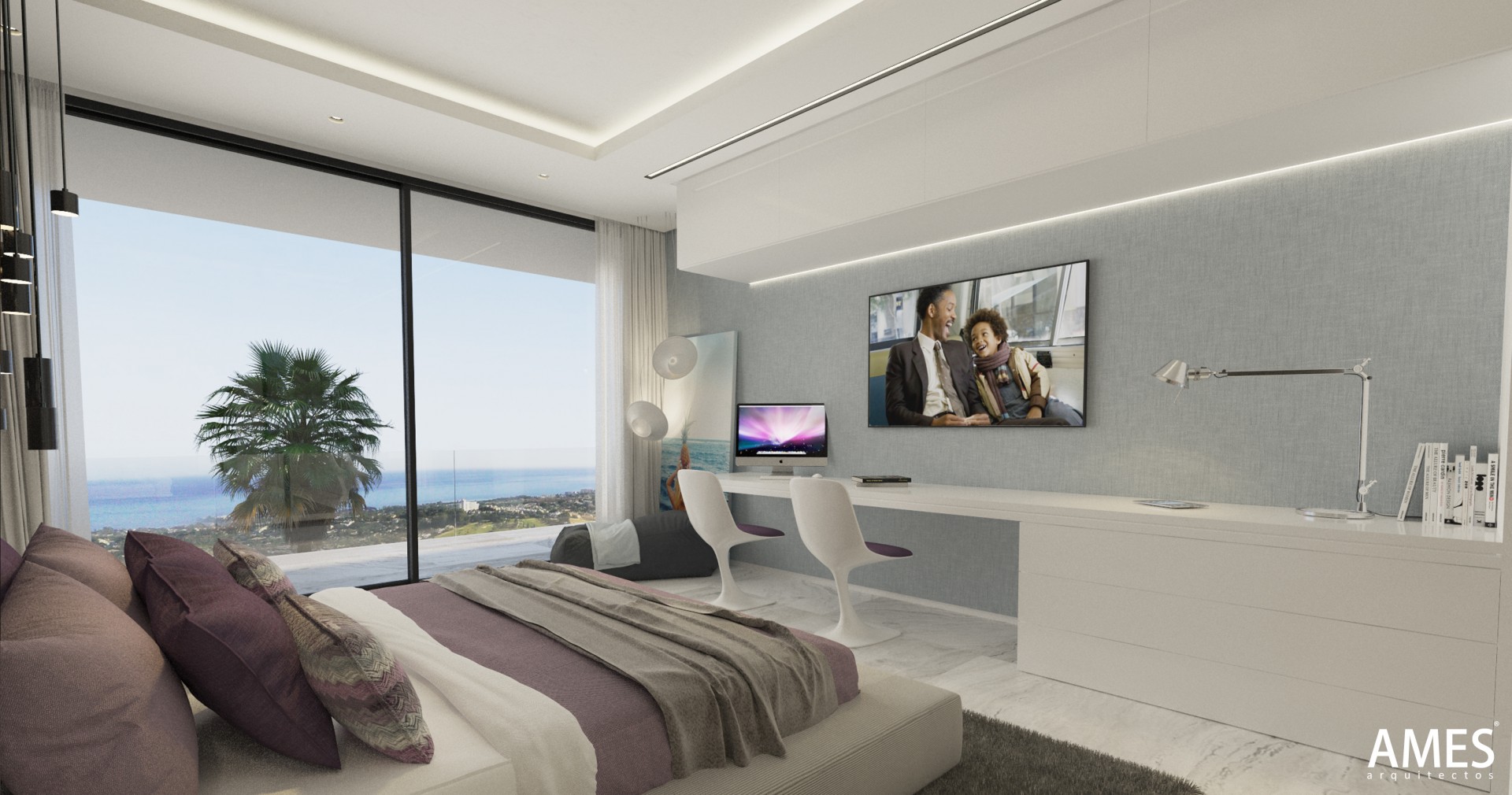 This stunning 6 bedroom suite contemporary masterpiece is located in the exclusive El Madroñal gated residential neighborhood in a quiet location and affording spectacular mountain and sea views from both the expansive living areas and bedrooms.

The villa will feature a light filled living space with uninterrupted mountain and sea views from the spacious and luxurious open plan entrance hall with an amazing water cascade , double sized drawing room, sitting area, dinning room and the designer kitchen. A guest bedroom suite will complete this floor. Direct access to the large infinity pool and terracing with amazing views from the entire ground floor because of the impressive floor to ceiling

windows. The first floor comprises the spacious master suite complete with sitting area and double sized bathroom with feature plunge pool. Two further bedroom suites at this level, all enjoying magnificent views. The lower level will feature an impressive spa area with a heated indoor pool, sauna, hammam and fully equipped gymnasium. Cinema room, bodega and two further bedroom suites in this level. The property will convey a sense of sophistication that will satisfy the most discerning buyers.

Minutes away from Puerto Banus and Marbella yet in a privileged and Secure Enclave in the hills above San Pedro de Alcantara.

El Madroñal is a truly exceptional private residential estate of quality-built villas located some 10 minutes drive into the hills above Marbella and Puerto Banús.

Due to the estate’s elevated position in the foothills of the Sierra de las Nieves mountain range, most of the Villas for Sale in Madroñal, offer exceptional country, mountain and/or coastal views. The community is also just a short drive from some of the coast’s leading golf courses, including La Zagaleta, Los Arqueros, La Quinta and Los Naranjos, to name but a few.

History The history of Benahavis starts at the end of the XIth century, when the Arabs founded the town. Closely related with the Costa del Sol’s Arabic past, and particularly with Marbella, the district which it belonged to until it was granted the so-called “Carta Puebla” by Philip II in 1572. Montemayor Castle, built prior to the Construction of Benahavis, playes a very important role in the battles between the various Arabs kings in Andalusia, because of its strategic position. It was disputed for many years by the military factions of the epoch. Its prominent location overlooking up to a hundred kilometres of seaboard, and even the African coast, was extremely useful at a time when piracy and invasion were commonplace.

The town takes its name from Havis, who reigned in Montemayor Castle. To be precise, Benahavis is basically Arabic (Ben al Havis) and means “son of Havis”.

The castle’s strategic location drew the attention of the Catholic Monarchs, intent on conquering the last Moorish kingdoms in the south of the Iberian Peninsula. Isabel and Ferdinand’s forces had already laid siege to the Nazarite kingdom of Granada, but they decided first to occupy the nearby province of Malaga.

Soon on the 11th of June, 1485, Benahavis, together with the localities of Daidin, Montemayor Castle, Cortes Fortress, Oxen, Arboto, Almachor, Tramores and Calalui Fort (the Castle of Light), in the Bermeja Mountains, all within the district of Marbella, were handed over to King Ferdinand the Catholic, by Mohammed Abuneza after the signing of the capitulation.

The Catholic King entrusted their custody to Don Pedro Villandrado, Count of Ribadeo, the first christian mayor of Benahavis. From that moment on, a dispute arose between Benahavís and Marbella which lasted three and half centuries, until Benahavís achieved the status of a completely independent community.

As for Montemayor Castle, it is worth noting that as well as its impressive location, it had an underground passageway connecting it with the coast, through which the Arabs were able to transport soldiers.

Nature & Wildlife The privileged situation of Benahavis, surrounded by mountains, between the Sierra Blanca behind Estepona and the Ronda mountain range, and only a few kilometres from Marbella and Estepona, municipalities bordering with the village territory, convert Benahavis into an authentic treasure for lovers of unspoilt nature.

From its mountains you will be able to overlook more than 100 kilometres of the Costa del Sol and a good stretch of the African mountain range on clear days.

Three rivers cross the Benahavis territory, all of them have their sources in the Ronda mountain range and end up in the Mediterranean :

The Benahavis territory is very picturesque. From the N340, between San Pedro and Estepona, you’ll get to the Benahavis access road. Immediatly, the terrain gets more mountainous, and the first outskirts of the Serrania de Ronda show up. Over the ages, the Guadalmina river has carved out a deep valley on the side of the road.

On both sides, you can see the mountain peaks. Close to the village, the river valley becomes a real canyon, which is called ” las Angosturas ” because of its narrowness ( all to do with “anguish” ) , which is classified as a natural monument. Once you have passed this, you will see the first houses of the village. From the village, you can sometimes see the snowcapped peaks of the Palmitera mountain ( 1379 m above sea level ) in winter. Plenty of granite, marble and peridotites form an important part of the geology in the territory of Benahavis.

You should be logged in order to use Favorites feature.

Using Favorites allows you to keep all of the development you like and track price change.

×
Get all the details of this property

Director Pierre Bergmans and a team of 2 senior property advisors can offer personal and individual consulting when it comes to our speciality and deep knowledge of buying New Build Properties and Offplan in Costa Del Sol. The Agents live on the coast from Malaga city to Estepona and therefore know first hand about all the secrets of each area.

Feel free to contact Pierre directly for a informal conversation + 34 627 61 38 38 or via E-mail pierre@offplan.es

All new properties for sale on Costa Del Sol